2020 Exchange has been cancelled

By now those of you who were expecting to host your Beaumontais family will have heard from Laura that they will not be coming. I have been in touch with their president Jacky Pillais and we are both agreed that we had no alternative but to postpone the visit. I have said that we will still host the next visit, either this September if a convenient date can be agreed or more likely next May when we would normally have been going to Beaumont. They are asking their membership which of these options they would prefer, and we need to formulate our views on this as well. Please let me or any committee member know which of these you would prefer.
We are fortunate that we have incurred no expenditure in cancelling the visit.
Clearly we won’t be holding any meetings or social events for the foreseeable future. We have a slot for Town Hall Teas on Sunday 21st August so hopefully things will be back to something like normal by then.

In the meantime please keep safe and well

Currently the aims of our constitution are principally achieved by the annual exchange visit, and in 2019 it was our turn to make the journey to Beaumont.

So, on the last weekend of May thirty-six members of our Society, twenty-eight adults and eight children, made their way from Wotton-under-Edge to our twin town for the thirty second exchange between our two communities. At a welcome reception on the Friday evening we were greeted by the mayor of Beaumont and old acquaintances were renewed. The evening was spent in the homes of our host families. On the Saturday we took a coach trip together. First on the itinerary was a guided tour of the delightful Chateau de Gaillon. Then, after a picnic lunch in the sunshine, the coach proceeded to Monet’s world-famous garden at Giverny. In the evening everyone gathered in a local restaurant for a formal celebratory dinner. The Sunday was a free day when each Wotton family was entertained by our respective French hosts. The exchange concluded on the Monday morning when everyone convened to share coffee and pastries and to say their good-byes, promising to all meet again, in Wotton, in May 2020.

Our programme of social events began on 17th May with a pre-twinning get-together at the Star. On July 6th Cathy and Derek Aston hosted a BBQ at Westend, Wickwar. On 8th September the Society hosted Town Hall Teas. Later in September Cathy and Derek were once again the hosts when they organised three dinner evenings at Westend. The year of events finished on November 16th with a quiz and supper at the Club Room in Gloucester Street.

Town Hall teas, the BBQ, the dinner evenings and the quiz were all valuable fund raisers, and thanks are due to Cathy and Derek, and to all those who supported the Society on those occasions.

I think it appropriate to mention that in October I represented the Society at a reception acknowledging George Carpenter’s 50 years as Town Crier; and on Remembrance Sunday, accompanied by Martin and Lucy Taylor, I laid a wreath at the war memorial on our behalf.

After much discussion the committee decided to apply for affiliation to the Wotton under Edge and District Community Recreational Trust, and in July our application was accepted. Currently nine other clubs and societies in Wotton are affiliated to the Trust. The Trust has charitable status and under its umbrella our Society could in future seek funding, for example financial support for young people to travel to Beaumont.

During the year we said good-bye to three stalwarts of our Society. Iain Marchant, Macrae McLusky and Peter Gadsden were not only long-standing members of the Beaumont-le-Roger Society but also men who made a significant contribution to the wider community. You may not all be aware of the role Peter Gadsden played in the establishment of our twinning. It came about in the following manner, and I quote Peter’s own words more or less verbatim:

“One of my partners in the office, Clive Major, was married to a schoolteacher who, while at Oxford University, became good friends with a Dr Robert Corbett and his wife Jean. Robert Corbett subsequently became a director of a French oil company, lived for some time in Paris, but later moved to a village near Beaumont. Clive Major and his wife were invited to stay with the Corbetts. Jean Corbett played tennis with Marie Françoise Desson, wife of the mayor of Beaumont, Serge Desson. She learnt that Serge was anxious to learn of an English town about the same size and character with which to twin. On his return to England Clive Major relayed this information to me, knowing that I was a town councillor in Wotton. The rest, as they say, is history. Norman Ward, town mayor, David Kennedy, town clerk, and I together with our respective wives, set off in two cars to see for ourselves whether or not we would wish to become associated with Beaumont. A delegation from Beaumont was then invited to Wotton and was hosted in our own homes”.

I would like to say a big thank you to all the members of our committee for their support during the year; in particular Cathy Aston, supported as ever by Derek, who expertly organised another full programme of social events. Their contribution to our Society over several years cannot be over-estimated. John Mugridge worked tirelessly and efficiently making arrangements for our visit to Beaumont, as well as sorting out our membership list. Treasurer Martin Taylor has managed the accounts for us, and vice-chairman Ken Tucker has acted as minuting secretary and been a constant support to me as chairman. Thanks are also due to Mark Woolfrey for continuing to look after our website. Finally, may I draw your attention to our website wottontwinningsociety.org which provides up to date information on our activities, as well as an archive of photographs and previous events.

The Beaumont-le-Roger Society
An Account of Exchange Visit to Beaumont, 24-27 May 2019

24th May
It was a lovely, sunny afternoon when we arrived at our host’s home just outside Beaumont-le-Roger on 24th May.
We had driven from just outside Paris, where we had been staying for a few days prior to the exchange weekend. There was no coach from Wotton this time, mostly because, like us, many wanted to enjoy an extended holiday. So everybody was already in France, and some already staying with their exchange hosts when the weekend officially started at the Reception at Fabrique de la Risle craft centre at 18:00.
The Reception was the perfect opportunity for old friends to reunite over a glass of champagne – and for the new exchangees to be introduced to their hosts and make new friends.
The mayor of Beaumont gave us a warm welcome and after the formalities, everybody mingled and took advantage of the venue to admire the local crafts on display.
Then it was back to our host’s home for an evening meal and lots of catching-up since the previous meeting.

25th May
A full day was planned for Saturday, starting at 08:30 at Impasse la Risle, where we all met to take our coaches for the outing.
First stop was the famous Château de Gaillon, where an excellent guide gave us the tour and a very interesting narrative (in English) of the Château’s from its 16th century origin, through various repurposings to the present day renovations.
After a picnic in a nearby garden on a very warm day, we took our coaches to Monet’s house and gardens (complete with lily pond) at Giverny. It was very busy with tourists from all around the world enjoying the story of Monet’s time at Giverny, the artwork and the fabulous gardens.
Then it was back on board the coaches for the return journey to Beaumont and ‘home’ to get ready for a celebration dinner at the Hostellerie du Lion d’Or in Beaumont.
We convened at 20:00 for champagne and amuse-bouches before settling down for a delicious dinner with our Beaumont friends. During the meal we were entertained by a magician performing close-up tricks as he moved from group to group, so that everyone could enjoy the magic and his very funny patter (in French and English).
There were short speeches from both Societies – including a written message from Wotton’s new Mayor, Roger Claydon – expressing mutual delight in the exchange visit and the ongoing strength of the twinning organisations.
After dinner, as the adults finished the wine and chatted with one another, the youngsters ‘escaped’ to the secure garden adjacent to the dining hall to play and also chat to one another.
Then it was back to our hosts for a nightcap and a good night’s sleep.

26th May
Sunday was a free day for visits to local attractions, the seaside or just chilling locally.
For the members of the two committees there was the customary joint meeting in the morning to discuss, amongst other things, the proposed dates for the 2020 visit to Wotton.
Afterwards, we visited nearby Bernay, with its historic timber-framed buildings. On the way home, our hosts had organised a visit to a local boulangerie to see how baguettes, croissants and other breads and pastries are made – we took away sever samples for breakfast the following morning.

27th May
All too soon the twinning weekend was over.
We all met back at Impasse la Risle, where the Beaumont committee laid on coffee and pastries, and we all said our sad goodbyes before setting off for trains, ports or the tunnel for our return trip home – except, of course, for those continuing their holiday in France.
And that was the end of the very successful and enjoyable 2019 exchange weekend in Beaumont-le-Roger. 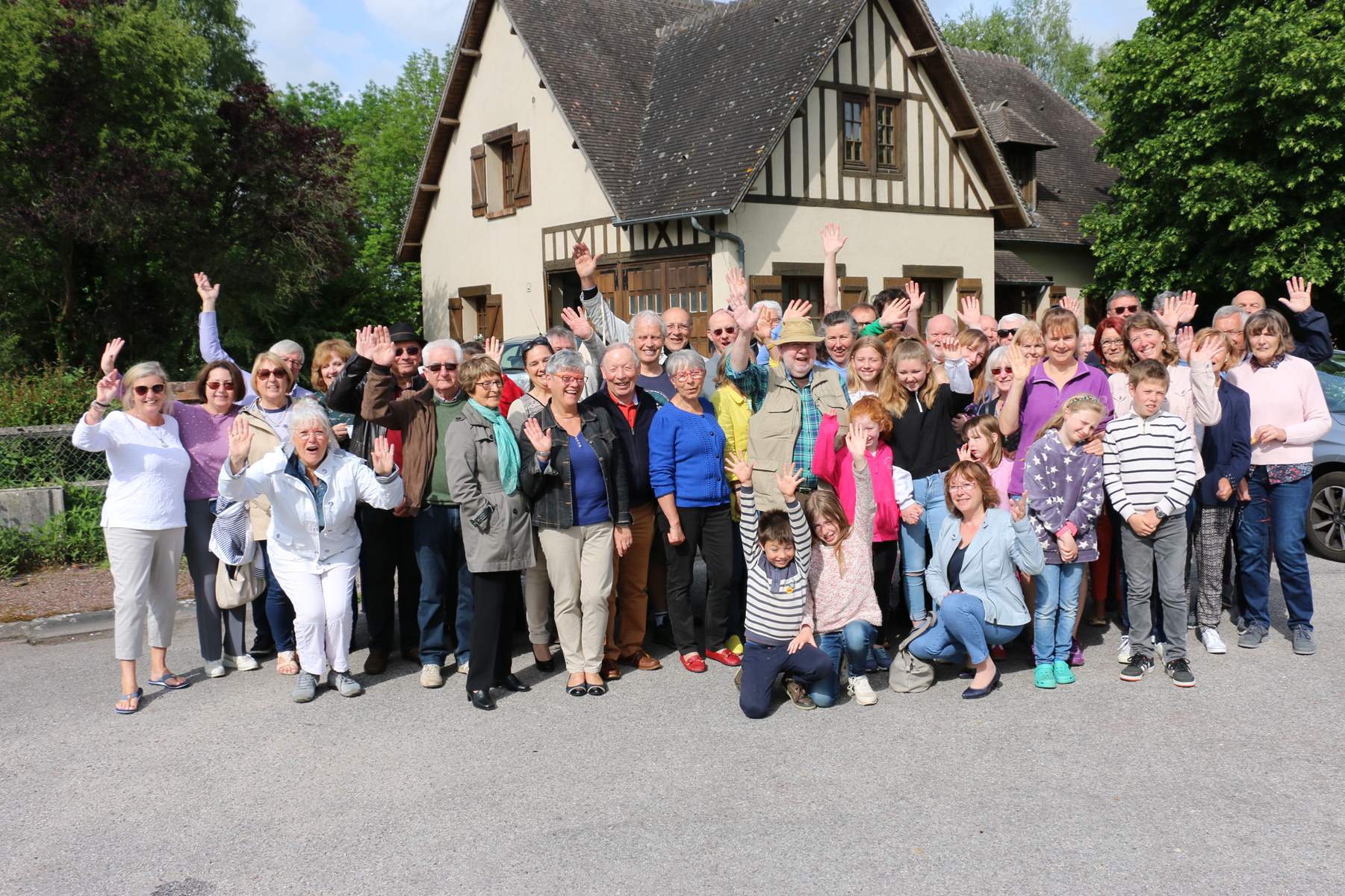